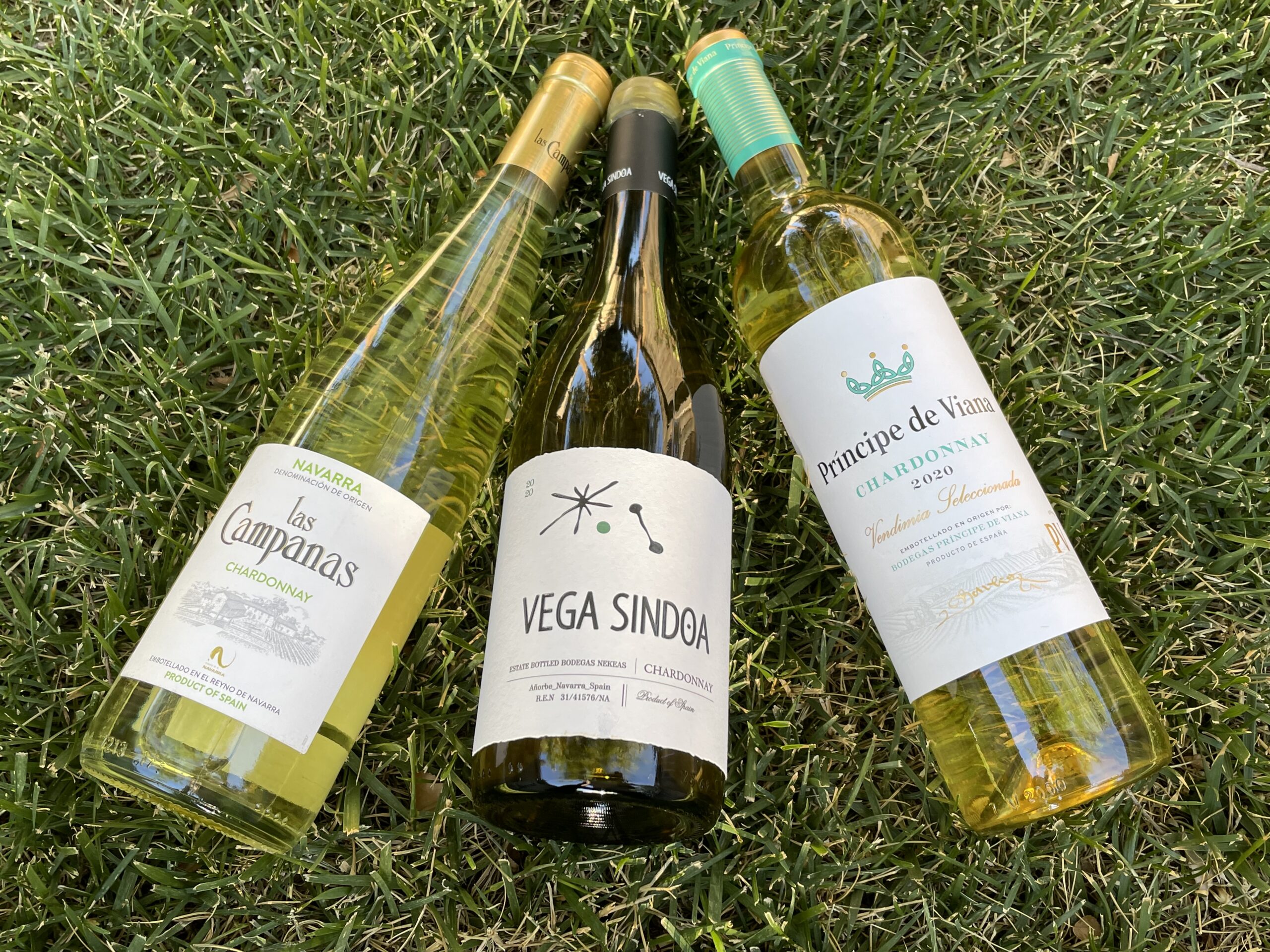 Located in the northern portion of Spain, situated just below France lies the autonomous wine region, Navarra. The region, home of a single DO with the same name, is divided into five sub-regions; Valdizarbe, Tierra Estella, Ribera Alta, Ribera Baja, and Baja Montaña. These regions are extremely diverse thanks to the proximity to the Atlantic Ocean, the Pyrenees Mountains and the Ebro River.

Navarra’s history dates back to over 40,000 years ago. Presence of burial tombs known as “dolmens” have been 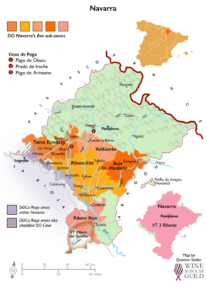 discovered and are a constant reminder of the region’s connection to the Bronze Age. Although the Romans did inhabit central and  southern Navarra, thanks to the mountainous terrain in the northern portion, they never really laid made an impact.  Once the Roman empire began to fall, the Basques were able to defend the region against the ensuing Visigoths and Franks.

Beginning in the 9th century, monasteries were built and along with them vineyards were planted. Navarra became a resting place for the pilgrims that traveled along the Camino de Santiago en route to Galicia. Over the next few centuries, Navarra rule changed hands, but the two things that remained were the people’s right to exercise as a self government known as “fueros” and the importance of vineyards. By the 14th century, Navarra’s primary agriculture was wine exportation.

Being landlocked, Navarra experiences a mostly continental climate with some maritime influence from the Bay of Biscay. Thanks to its location to the Pyrenes Mountains, the Montaña subzone is the coolest and wettest. The majority of vineyards are found in the two southern most subzones of Zona Media and Ribera. Also effecting the Ribera is the all important Cierzo wines which are strong, dry and usually cold wind that blows from the North or Northwest through the Ebro River Basin.

During the 19th century, when Phylloxera hit the vines of France, many winemakers travelled Navarra to produce wine in Spain. With them, they brought their knowledge and Navarra prospered. Unfortunately, when Phylloxera hit Navarra, it was catastrophic. They lost nearly 95% of the vines and over 80 different varieties. They did not recover quickly. It wasn’t until the beginning of the 20th century that new vines were planted. The majority of vines planted were Garnacha. But since the French brought vines with them when they came, Cabernet Sauvignon and Merlot make up a large portion of the plantings.

Approximately 90% of the vineyards are planted to red varieties but only about 60% of the wine produced is vino tinto. Thirty percent of the production is vino rosado and ten percent is vino blanco. The majority of white grape vines are planted to Chardonnay, which comprises only 7% of total plantings.  In fact, I wasn’t even aware of the region producing any Chardonnay, prior to my visit, but once I tasted, I was captivated.

Named after the first prince of Viana, Carlos de Evreux, who has held aristocratic title since 1423, Bodegas Príncipe de Viana is a relatively young winery at just over 30 years. Today, they are leaders in research and renewal, while continuing tradition. They view themselves as ambassadors for the vines and the environment.

The wine was fermented in 50% new French oak barrels and kept on its fine lees for approximately three months with regular bâttonages. Produced with 100% Chardonnay from vines on poor soils to stress the vines and allow for true varietal expression.

Located in the Valley of Valdizarbe, Bodegas Nekeas was one of the first wineries to bring back viticulture to the region after the Phylloxera devastation. The winery was founded by eight families who were then and continue today to be focused on caring for the land.

The vines are planted on southwest facing hillsides composed of red and gray marl, and sandstone and experience a Continental climate with a Mediterranean influence. The vines are trellised and are approximately 25 years old. The wine was fermented in new French oak barrels and saw weekly batonnage and aging sur lie for 4 months.

The wine pours pale gold in the glass. Aromas of tropical fruits, apple and honeysuckle.  On the palate it is dry, medium acidity, low alcohol, medium body and medium flavors of tropical fruit, vanilla, and apple. Medium finish. (SRP: $14)

Founded in 1864, Bodegas Manzanos Campanas is the oldest winery in Navarra, as well as the first winery in the region to spotlight the production of rosé. The winery is family run and has wineries in both Navarra and Rioja. The name is derived by a combination of the family name, Manzanos, and the spanish word for “bell” (campanas), the town in which the winery is located.  In past times, the winery is located on the road to Santiago, where the winery used to be a pilgrim hostel.

Bodegas Manzanos Campanas farms 550 hectares of vines that are an average of 20 years old.  The wine pours pale lemon in the glass. Its medium aromas are filled with pineapple, peach, and lychee. On the palate, the wine is dry, medium acidity, low alcohol, full body and medium flavors of stone fruit, grapefruit and almond. Medium finish. (SRP: $10)

Find out more about Navarra and additional Chardonnays tasted in my television segment on KSEE TV.

We’ve stacked the odds so that you can get our award winning wines without breaking the bank. Click the image to find out all of the benefits of joining the CHALK CLUB including discounted shipping and up to 35% off all purchases. .

Sometimes in life, all the stars and planets align and things work out perfectly. Back in January, Winephabet Street explored the Sangiovese grape. As it turns out, the next week we met up in NYC to attend Benvenuto Brunello. The event was hosted by the Consorzio del Vino Brunello di Montalcino, and provided the opportunity…

As part of the Monthly Wine Writing Challenge started by Jeff of the drunken cyclist I wrote a piece on Success.  When I thought about the concept of wine and success, it hit me that I wanted to share the success stories of people in the industry from the Paso Robles area.  Mike and I fell…

Well, our trip is coming to an end. This is our last day on the “Right Coast”. We will be heading back to the “Wrong Coast” tomorrow.  Today was all about pleasure. We are just going out and tasting some wine. Of course, we are always looking for some Cab Franc!   Rancho Sisquoc Tasting…

Welcome back to speed wine tasting! Did you rest up from last week’s post? Well get ready, because there is more amazing wine today! There is definitely more than just Zinfandel in Lodi! If you missed the whole speed dating of wine concept, or if you want to read about the white wines, head over to my first…

Welcome to our latest installment of #WinephabetStreet brought to you by Dracaena Wines and Trio North Wildwood. In this series, Debbie Gioquindo and I work our way through the wine world one letter each month. We discuss the characteristics and history of the grape, as well as suggested wine pairings. So uncork, unscrew or saber…

*This started off being a single post, however, as I got into writing it… I realized I had too much to say to put it into one post. This first post focuses on Hungarian history and it’s not so distant Communistic control.  Mike and I recently returned from Villány as guests of the Franc &…