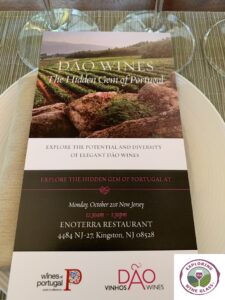 While walking through the Dão region in Portugal, you are taken aback by the sheer beauty of the region. As you walk the vineyards, you notice the large rocks, actually boulders that make up the terroir. Not only is Portugal perfect for tourism, but it holds an immense amount of cultural history.

Although Portugal is a rather small country, in fact, you can fit it in between San Francisco and Los Angeles, it is a magnificent country for wine lovers thanks to its diversity. The region has over 250 native varieties as well as wine history that pre-dates the Romans governing the country. It has been suggested that wine has been a part of the Portuguese history since the Bronze Era. The Iberian Peninsula is unique in that these native grape varieties cannot be traced back to any other country. Today, with the DNA analysis available, it has been proven that these varieties were at one time wild vines in Portugal.

In 1986, Portugal joined the EU, and saw a major financial revolution.  A large portion of this money went to improving its infrastructure and the wine sector, both increasing Portugal’s tourism appeal. Once joining the EU, the wine classification system was reworked to be more aligned with the system most people are familiar with. Once aligning the classification system and improving the cities themselves occurred, people began to take notice of other wines, other than the sweet wines of Port and Madera. Regions such as the Duoro, began to make high quality dry red wines. 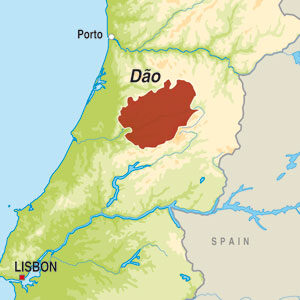 The Dão region, located just south of the Douro Valley, has conditions that are extremely unique to those in the rest of the country. Although it has had a poor reputation in the past, thanks to media attention and improvements in production, it is now one of the top rated wine regions within Europe. In 1987, the governing body, CVR (Comissão Vitivinícola Regional) was created. Each region of Portugal has its own commission of elected official is responsible for guaranteeing the integrity and quality of wine that is produced in each region. The commission is all supreme. They, in fact can go to a vineyard site to certify that what a vineyard is claiming is actually true, including the vines under acre of a particular variety.

The wines of Portugal are divided into three categories. Vinho or table wine is not certified by the commission and thereby does not need to follow the rules set up by the commission. The second tier, IGP or Vinho Regional is a designation that is controlled by the CVR. These wines do follow specific rules for the region,but are less restrictive than the DOC/DOP wines, which are the top quality wines. The DOC, as it is known in Portugal or DOP in Europe is a regional wine that is controlled by the commission. These wines must adhere to specific regulations for grape varieties, where they are grown, winemaking techniques as well as alcohol levels. This category represents 49% of all the wines in Portugal.

Located in the central portion of Portugal, the Dão is surrounded by four major mountain regions which protect it from any influence from the interior. There are two major climatic influences within Portugal. The first is the ocean that encompasses both the western and southern coasts and the second is the continental climate from the interior that produce extremely severe winds. With the flattened lands to the south, the vineyards in the Dão benefit of the ocean influence while being protected by the damaging winds. The region chose it name from the Dão river on which the majority of the vineyards are found. The river is a tributary of the Mondego river which is Portugal’s longest river.

Wines from the Dão are capable of being aged for long periods of time thanks to the high tannin levels and their acidity development. The fruit is grown on high altitude vines that are stressed due to the harsh soils of decomposing granite and schist. Vineyards are located as low as 500 ft above sea level and can span above 2000 ft, but the on average the vineyards are found between 1300 and 1600 ft. Large diurnal shifts and long sunny days paired with the altitudes, provide for a longer growing season which allow the fruit to remain on the vines to full ripeness. The wines produced are low in alcohol, high in acidity, and have a lower pH. Additionally, the geography of the rivers that flow through the region, give the Dão a unique and perfect Mediterranean climate, with excess rain only during the non growing months of October and April, the risk of mold or mildew is minimal. The winter can bring severe cold, leading to a frost concern; however, thanks to the long hours of sunlight, this distress is minimal.

The vineyards represent less than 10% of the region’s landscape and can be found dispersed among pine and eucalyptus trees. Many believe that Touriga Nacional is the most planted, because it is probably the best known variety, but in reality the most planted variety planted in the region is Jaen (Mencia.) Other reds found in the region are Tinta Roriz (Tempranillo) and Alfrocheiro, which originated in Dão.

Jaen shows at its best in the Dão region, and that’s where most of it is grown. The vines are vigorous, prone to mildew and botrytis infection, and the grapes ripen early, providing low acidity and poor colour. At worst its wines are watery and acidic, at best highly perfumed, reminiscent of blackberry, blueberry and cherry. Despite a slightly rustic character, it can make early-drinking, soft, silky reds that are simple yet seductive.

Touriga Nacional is a thick-skinned grape, and those skins are rich in color and tannins, giving excellent structure and ageing capacity. But it also has wonderful, intense flavors, at the same time floral and fruity – ripe blackcurrants, raspberries – with complex hints also of herbs and licorice. Yields are never high.

Tinta Roriz’ vines are very vigorous and productive and adapt well to different climates and soils, although it prefers hot, dry climates on sandy or clay-limestone soils. It tends to be blended with other varieties, typically Touriga Nacional and Touriga Franca, and also with Trincadeira and Alicante Bouschet in the Alentejo.

Alfrocheiro wines are rich in color with firm but ripe tannins and a good balance of tannins, alcohol, acidity and attractive, berry fruit, reminiscent in particular of blackberries and ripe stawberries. The vines are vigorous, requiring more attention than many other varieties to keep the vegetation under control, and they are prone to attack by oidium and botrytis (http://www.winesofportugal.info/)

But don’t be fooled, Dão isn’t all red! In fact they create wines that are so elegant that 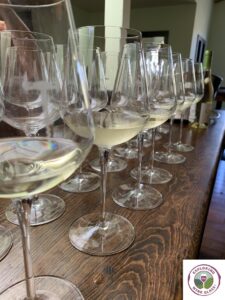 they are often compared to Burgundian wines. Encruzado is currently restricted to the DOC Dão. The wine provides aromas of violets, roses with a hint of citrus notes. They are complex wines that can also, depending on the conditions, show some resin and deep mineral notes. The wines are well structured and have incredible aging ability. It is found both as a single variety as well as being used as a blend.

Whether you are a red or white fan, Dão wines offer an incredible value. During a sit down lunch presentation sponsored by the Wines of Portugal and organized by Allison Levine, I had the distinct privilege to taste through an spectacular portfolio.

There were ten wines in total with four being whites. Each one was in my honest opinion, exceptional. When I was told the prices, I almost fell off my chair.

As I mentioned, each wine was stellar, and there was not one that I would not like in my glass again, but when you factor in the QPR, the two standouts that I believe are both case worthy are the 2018 Cabriz Reserva Vinho Branco and the 2016 Pedra Cancela “Seleção do Enólogo” Red, both unbelievably priced at $9.

Also, very intriguing and worthy of a purchase was the 2016 Casa da Passarella “O Fugitivo Curtimenta” White. Curtimenta is the Portuguese word for skin contact. The wine is a natural, orange wine. I am not the biggest fan of orange wines, there is something about them that just does not appeal to me, maybe its the “funk,” but this wine did not have that. It is a blend of native grapes including Encruzado, Uva Cão, Bical and Terrantez. It was fermented on native yeast with its stems and saw skin contact for one month. Aged in 600 Lt casks for one year with an ABV of 13%.

Jersey Geography Do you remember those old Miller Light commercials where the “slightly over the hill” athletes got into an argument about whether the beer was “Less filling” or “Tastes great?” Well, New Jersey has their own version of the argument. “Central Jersey” or “No Central Jersey.” I know, doesn’t seem like a big deal,… 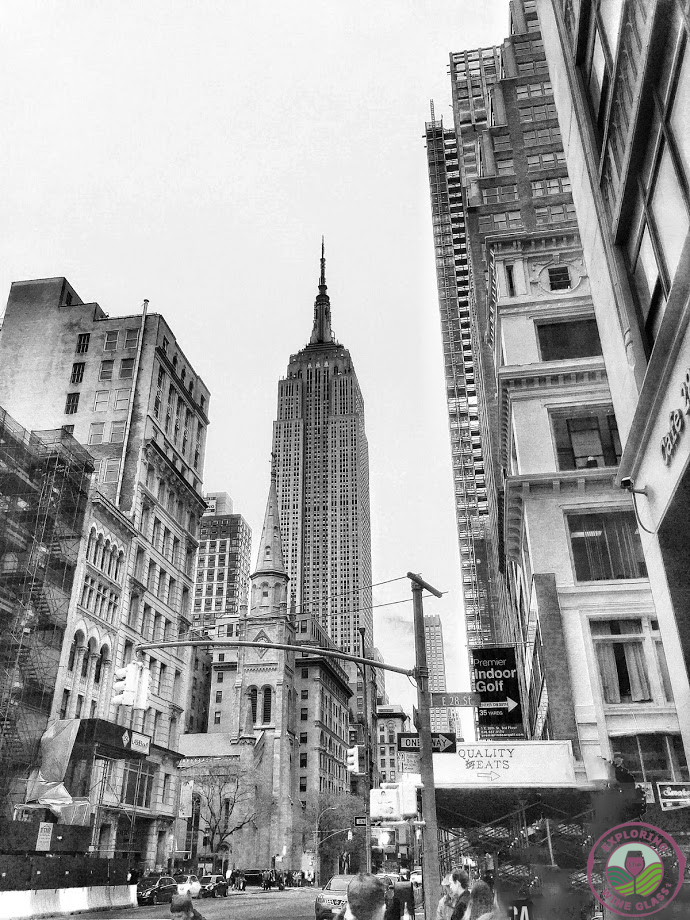 About Château Clerc Milon I have become enamored with Bordeaux. There, I said it! I have done a complete 180 on the region and their wines. From the moment I arrived in April I was hooked. Seeing En Primeur first hand is something that I will never forget and something I hope to experience again…

The Day It was a beautiful day in New York City. The sun was shining, which was a rarity this Spring, as I listened to one of my favorite podcasts and walked down Grand Street on my way to Tomiño Taberna Gallega. The intimate restaurant is a little slice of Galicia in the heart of…

Paso Robles is now the home of over 250 wineries. It seems like every day there are new wineries opening which only means one thing. Time to get on the road and do some exploring. According to Paso Robles Wine Country there are nine different trails that you can tour. Today, we chose to delve into…

Day 2 travels brought us south of SLO to the Buellton, Lompoc, Solvang area. This area is considered part of the Santa Barbara county wine area.  We chose to come to this area today because Solvang has a festival every third Wednesday of the month. We thought we would see what the festival had to…