I’m sure you have heard of the five “S’s” of wine; See – Swirl – Sniff – Sip – Savor.  Although most people associate ‘sip’ as the most influential aspect of wine tasting, it is actually the ‘sniff’ that is the main sense we use to appreciate wine.

We swirl the wine to release the aromas by introducing a small amount of oxygen into the liquid. When we sip the wine and coat our tongue, those marvelous odoriferous molecules are further liberated thanks to our body heat. These aromas are then transferred  retronasally to the olfactory receptor site. It is here that we truly experience the flavors.

These aromas are known as “stereoisomers.” These are compounds that take on similar molecular arrangements to familiar scents that our nose and brain can recognize. In other words, you  are “sensing” blackberry, not tasting it in our Cabernet Franc.

The act of smelling involves not only our nose, but a many portions of our brain. Smell can influence your emotion, behavior, memory, and thought. In simple terms, once an odor is detected by your sensory organs, nerve signals are sent to the brain where they are processed. Since taste also relies on the perception of molecules, these two senses are closely linked.

Structures of the olfactory system include

With the ability to recognize over 10,000 different odors, (although, this is now being debated. Recent research is stating this is a horrendous underestimate) it may sound like our olfactory system is pretty advanced. However, compared to other mammals, our system is actually pretty primitive. Take a dog for example, who’s noses contain  300 million olfactory receptors as compared to about six million in us and dedicate forty percent more of their brain to analyzing smells.

We definitely lose the contest versus the canines. But what about within our own species? Male versus female; who wins the olfactory evolution battle?

Battle of the Sexes

Before I get into the details of the research, I want to 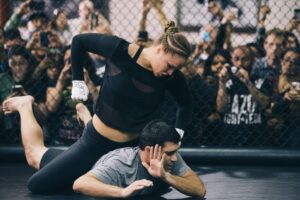 start with a disclaimer. Individuals show great diversity in their ability to identify scents and odors and I am talking about generalizations. Just as men typically are stronger than women and females normally have better balance than males, (yes, there is science behind those two statements) there are obviously exceptions to those rules.

A November 2014 issue of PLoS ONE  studied postmortem material from 7 men and 11 women (ages 55–94 years.) Although there was no significant difference between the weights of the olfactory bulbs between the males (0.137g) and females (0.132 g) there was a significant difference found in the total number of cells. Females have on average 16.2 million while males only had 9.2 million. (43% difference) Additionally, the number of neurons in females reached 6.9 million, while the greatest number found in the males was 3.5 million in males, a difference of 49.3%.

Generally speaking, says Prof. Lent, larger brains with larger numbers of neurons correlate with the functional complexity provided by these brains. Thus, it makes sense to think that more neurons in the female olfactory bulbs would provide women with higher olfactory sensitivity.

What Does It Mean?

Why Does it Matter?

Since the Olfactory Bulb is the first synaptic stage after receptor transduction at the olfactory epithelium, it is reasonable to deduct that with women having more cells and neurons, they, in turn, have an increased odor threshold, discrimination, and identification.

There has not been any research (that I was able to find) that directly studies the relationship of the total cells and neurons and the ability to be a wine supertaster, but I have to admit, it lends itself to  a pretty strong hypothesis. Although the reason has not been determined, Linda Bartoshuk, a professor at the University of Florida Center for Smell and Taste, has found that there are more women supertasters than men.  In her study, 56% of 4,000 tested Americans were determined to be supertasters. Of the 2,240 supertasters 34% of them were females while only 22% of them were males.

Why has this occurred evolutionary wise? There are a few theories on this; but it basically comes down to survival of the fittest. It goes back to early human existence.  Some believe this olfactory ability is essential for reproductive behaviors such as mate bonding and kin recognition. Having superior smelling abilities was/is a compelling mechanism for sniffing out the right mate (ha, see what I did there?!) Men may think they are the dominant sex, but when it comes to mating, it is all about the female. Female peacocks choose their mate by watching the males go through an elaborate ritual displaying their feathers. The female stickleback fish waits idly by as multiple males spend days carrying small pebbles in their mouths to build the perfect home for her.  The female cardinal seeks out the male with the most vibrant red color. Yep, ladies, when it comes to mating we hold the reins and it seems that it holds true for wine tasting!

What are your thoughts on the topic?

Want to learn more about The Science of Tasting Wine? Here is a post I wrote back in 2014. You can also see it on Wine Folly’s website.

Dracaena Wines now has  a Wine Club! We named it the CHALK CLUB. Draco is on our label, but Vegas was getting a little jealous.  So we decided he deserved to be club spokesdog. In Las Vegas, betting CHALK means you are betting on all the favorites. We are betting that we are one of your favorite wineries, so we thought the name was apropos.  The club is simple yet a bit different than most. When you wager on us, we will ship you three bottles of wine twice a year; once in April and once in September. You can choose all red or a mix of red and rose’. You immediately receive 15% off ALL your wine purchases but what makes our club stand out is a progressive discount.  Let your club membership ride into the next year, your discount increases. Each year you parlay your membership, you receive an additional 5% off up to a plan maximum of 25%. Your club shipments are discounted. Flat $15 shipping PLUS we’ll cover your club shipping cost for your second shipment. That is $15 house money in a sure bet for you! So please head to our website; www.dracaenawines.com/chalk-club to find out all of the benefits of joining the CHALK CLUB and to sign up. We’ve stacked the odds so that you can get our award winning wines without breaking the bank.

I guess you can take the girl our of science (since I now teach Physical Education) but you can’t take the science out of the girl.  My undergrad and graduate degrees in Biology and the way too many years as a microbiologist are ingrained in me.  Although I don’t deal with science on a day…

Most people love fall colors.  The oohs and ahs as the leaves change colors and the season’s change drives an amazing tourist industry. People travel to the North East to see these colors.  Hotels revel in the peak color time because they can charge more per night for their rooms.  In deciduous trees (those that…

A mountain or hill, typically conical, having a crater or vent through which lava, rock fragments, hot vapor, and gas are being or have been erupted from the earth’s crust. A rupture on the crust of a planetary-mass object that allows hot lava, volcanic ash, and gases to escape from a magma chamber below the surface. Wow, that is…

Cabernet Franc is often used as a blending grape.  Many people have heard of it, but not too many have had the pleasure of sitting down with a glass of it as a stand alone varietal.  That in  itself is a shame, because Cab Franc is worthy of the spotlight.  The number one question when…