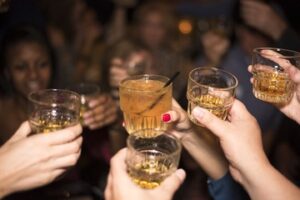 thought was a hysterical Christmas tradition, it triggered the idea for this post. People do some intriguing things when it comes to drinking. There are a myriad of traditions, like clinking glasses, that didn’t just pop up out of nowhere. There is a reason for them and I was interested in finding out the story behind them. For example, the clinking of glasses dates back to the Middle Ages. Back then it was a survival measure.  There was much distrust among comrades, and by clinking the glasses, you were ensuring that some of your drink spilled into the other glasses. This way if your drink was poisoned, you would in turn be sharing that poison with the person who was trying to kill you.

I thought I would share some of the more intriguing ones I have come across over the years, starting with the one that triggered this post, The Caragner.

While, not necessarily directly related to wine, it is a tradition in the Cataluña region of Spain. The tradition seems to have begun in the late seventeenth century. The character, the caragner, which translates to “the shitter” began showing up in nativity scenes. So yes, you have Mary, Joseph, the baby Jesus and a man “dropping the kids off at the pool” as my brother and sister in law call it. Dressed in traditional Catluña clothing, he typically is not found directly next to the main characters, rather off to the side somewhere and that is half the fun for the children as they try to spot him. According to Cataluñian lore, the crapper is fertilizing the lands and thereby fertilizing their future. 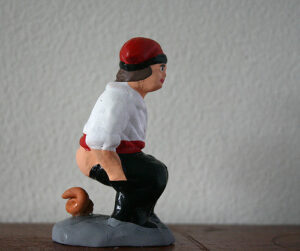 During a Ukraine wedding, it is tradition to try to steal the bride’s shoe. The wedding party, after successfully stealing the shoe, then drinks wine out of it. Although I found a couple of explanations for the tradition, the most common one was that as long as the bride “kept her feet on the floor” her shoes couldn’t be stolen. Maybe it is a tradition set up by the bride’s parents. This is actually only one of many traditions leading up to and during the wedding. After reading about these, I think I would love to attend a Ukranian wedding. They seem to know how to have fun. For example, the morning of the wedding, the groom must go to the the bride’s house and pay a ransom for his soon to be bride.  The bridesmaids greet him at the door and quiz him with questions about his betrothed. For each answer he gets incorrect, he must provide a larger ransom.  Another tradition, which is just outright hysterical is that early in the ceremony, the grooms mother is picked up and carted to the garbage! 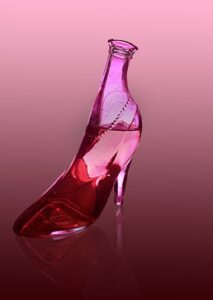 From the Ukraine wanting to make sure the groom knows his future bride, we go to Germany who take their drinks more seriously than making sure the groom is worthy of the bride. Here, the groomsmen go under the assumption that the groom truly loves his fiancé. The typical bachelorette party is reversed, when the night before the wedding, the groomsmen actually kidnap the bride and take her to a local pub. However, it is not the bride that gets to enjoy the festivities of her last night as a single woman. Instead, the groom, if he wants to see his love at the altar the next day, must find the correct pub and buy the groomsmen drinks 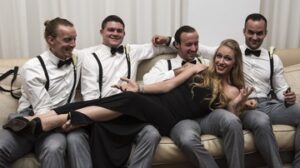 Alright, this one is a bit disgusting! But who am I to determine what is exciting to someone.  There is saloon in Canada that offers a drink titled the Sourtoe Cocktail.  I wonder if it’s like the secret menu at Starbucks or if it is listed right there on the menu.  When you saddle up to the bar and place your order, you choose your alcohol of choice and of course you pay extra for the toe.  The barender, known as the “Toe Captain” will remind you of the rules; The toe must hit your lips but there no biting, chewing or putting the toe in your mouth is allowed.  At which time, the Toe Captain will waive the toe in front of your face and drop it into the drink. Cheers!

“We’ve had the chief medical officer of the Yukon look at it and give it a clean bill of health,” Adam Gerle, the general manager of the Downtown Hotel explained. “As long as we keep the toes mummified, which we do by keeping them on salt and serving it in 40% alcohol, that keeps everything legal.” Wondering where the toes came from? It dates back to 1973, when the toe was discovered and found to be connected to a legend that dates back to the 1920s about bootlegging brothers who placed one of their frostbitten toes in moonshine as a keepsake; or a momen-toe if you will.

For our last tradition, I thought I’d wrap it back to Spain, since this was the initial inspiration for the post.  The wine war that happens annually in the Haro district of Spain sounds a lot more fun than drinking a toe. The La Batalla del Vino occurs on June 29th, Saint Peters Day (El dia de San Pedro). The festival was created to honor the patron of Haro, San Felices of Bilibio’s. Upon his death in the 6th century, people began to make pilgrimage to his burial site in the caves of Riscos de Bikibio in the foothills of the Obarenes Mountains.  During the 18th centruy, the Hermitage of San Felices de Bilibio chapel was built and sometime during the 20th century baptisms began to be performed there.  It is thought that this is the reasoning behind the wine wars of today.

Another popular theory behind the beginning of the wine war comes from an actual dispute during the 13th century. Apparently, there was a property line between the cities of Haro and Miranda de Ebro. In 1237, a judge whom was appointed by King Ferdinand the Third of Castile, demanded that Haro mark their boundaries with purple flags every year on San Pedro’s Day and the first Sunday of September. If they failed to do this, even just once, he would transfer the land to the people of Miranda de Ebro. This tradition continued for almost 500 years, until finally in 1710 after a mass, the flags were not raised and in celebration of ending the tradition, people began throwing wine at each other.

Want to play a game? Have fun at your next party with Blinders! Use code ETWG to receive 20%. Click the image below to be brought to my affiliate link. 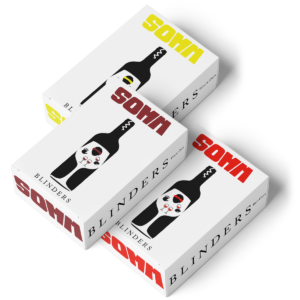 About a month ago, I posted the above photo online and it got quite the response. It had so many comments, I could barely keep up with them. Asking people to make a permanent decision on wine is one tough thing to do. Us winelovers, love wine! Not just a single one, but many, so… 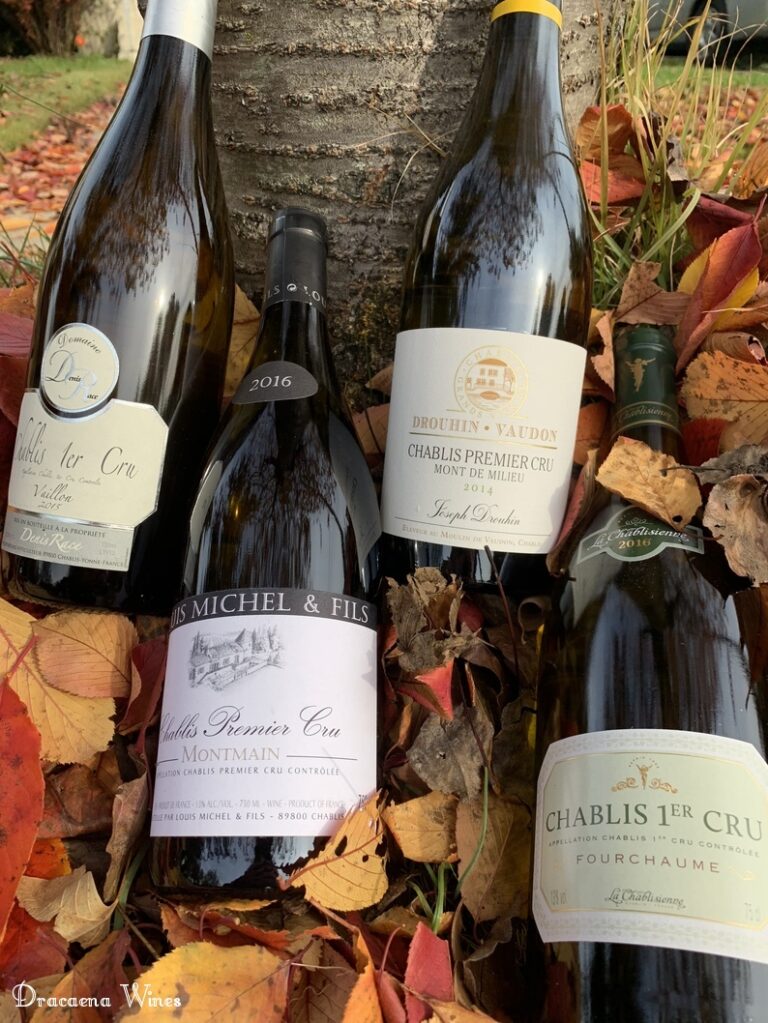 There is something about wine that intimidates people when they first begin to enjoy it. That is something that has always bothered me. Wine should be enjoyed and shared, it shouldn’t be scary. But I totally get it. It’s easy to be intimidated, since there is so much information surrounding wine. Wine regions, wine pairings,…

Picture It January 2017, spending the final evening in a house that was sold. Everything is packed. The emotions are running haywire. Thrilled and nervous at the same time about all the changes that are occurring in life. The packers have finally left and it is dinner time. You do the final walk through of…

Are you familiar with Beaujolais? First and foremost, it is a wine region and not a grape. The primary grape in Beaujolais is Gamay Noir and I am a huge fan! In fact, in order to be classified, the wine must contain at least 85% Gamay Noir. The wine growing region includes 2,000 wine growers…

The wine world is full of so many cool things! It is a world that reminds you every day that no matter how much you know, there is always something new to learn. A world that is filled with tiny regions to explore like the Jura that is a mere 2000ha as well as massive…

Happy Thanksgiving! Here’s a question for you. How many blogs did you read, or YouTube videos did you watch in these past couple of weeks that told you to stop trying to pair the perfect wine with your Thanksgiving dinner? They were everywhere. Everyone saying the same basic thing- the foods we serve on Thanksgiving don’t…