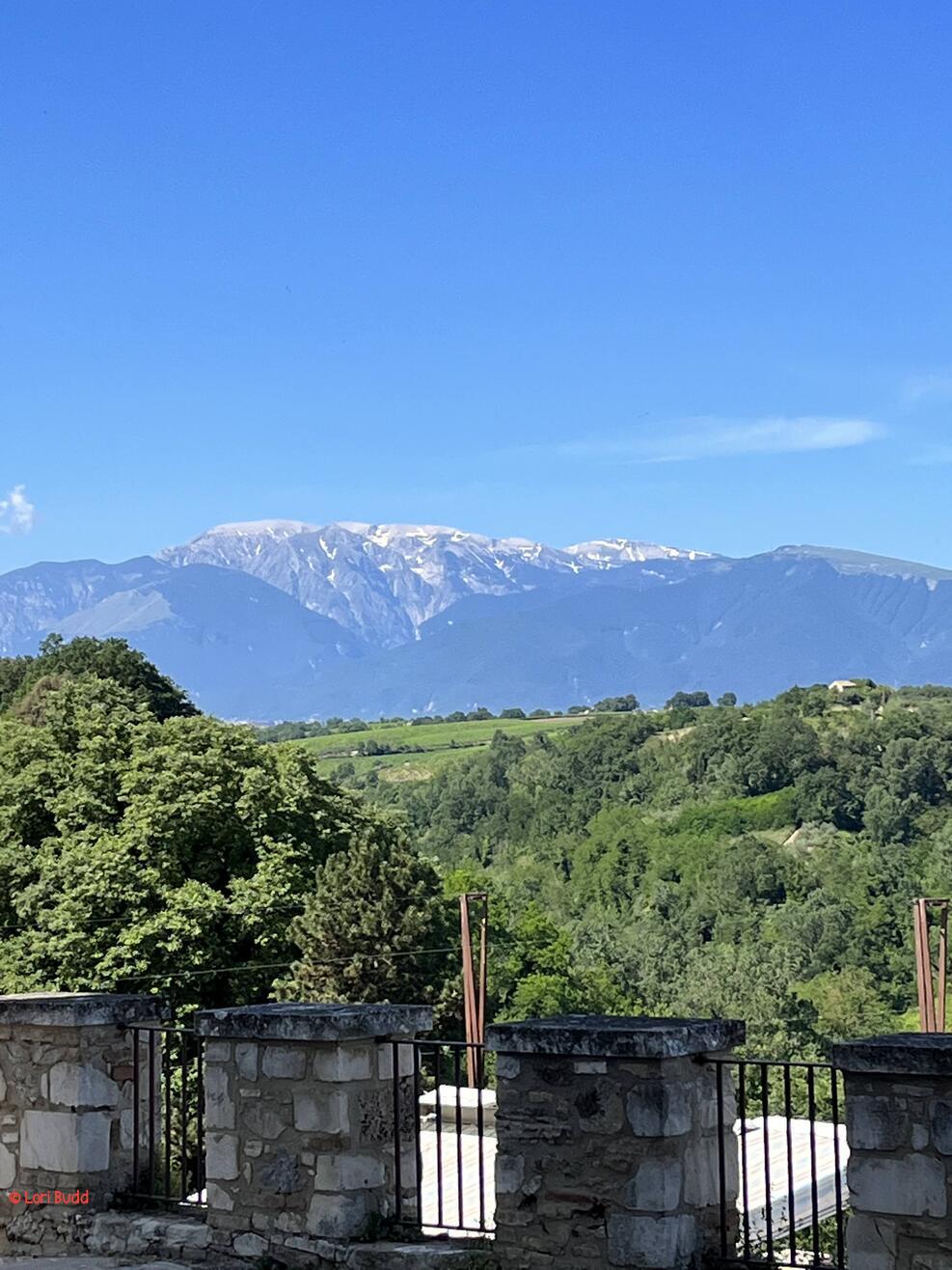 Imagine yourself landing in Rome, you are instantly seduced by the beauty of the ancient city. You spend a few days walking around taking in the sites. The beauty of the Colosseum aroused your senses and the sheer magnitude of the Vatican took your breath away. Wandering the Roman ruins and Palantine Hill allows you to fantasize what it must have been like to live during that time.  You count your blessings that you had the privilege of this experience and head back to the airport…. and you will be missing one of the most magnificent places Italy has to offer, just two hours east.

Abruzzo is located in central Italy between the Adriatic Sea and the Apennines Mountains. Divided into four provinces; Chieti, Pescara, Teramo and L’Aquila. Gaining its DOC status in 1968, Montepulciano d’Abruzzo may be the most renowned, but there is so much more this beautiful region has to offer.

Abruzzo, spans almost 11,000 square kilometers, of which a third of the land reside within three national parks, nature reserves and protected areas. This distinction makes the region one of the greenest areas in Europe. Other topographical influences include the two highest and most rugged peaks of the Apennines; the Gran Sasso and Majella Massifs. It is also home to the southernmost glacier in Europe; Ghiacciaio del Calderone, and an expansive stretch of beaches of approximately 130 kilometers along the Adriatic Sea.

The wine growing region is divided into two main sectors, the inland mountainous areas where almost 65% of the vines are grown and the extensive hills along the coast. Average rainfall is about 26 inches per year. There are two distinct climates within Abruzzo. The interior mountain zone experiences continental climate while the coastal zone is maritime. The Grand Sasso and Majella Massifs are only a forty minute car ride from the coast, and impart a large diurnal shift.

There are two winds that affect the region. The first wind that imparts a climatic influence occurs more often in the autumn and spring seasons. The Gaby originates from the southwest (Iibeccio) and is not as strong as the larger Foehn. This wind brings warm air that carries slight moisture. The winds can reach speeds up to 50km/hr. The coastal vineyards within Abruzzo see these moist breezes.

Due to its proximity to the Apennines, Abruzzo also experiences the effects of the larger Foehn (Föhn) winds. The Foehn also occurs more frequently in autumn and spring but imparts a hot, dry wind. As the moisture in the air reaches the mountain barrier, it begins to lose its humidity. As it reaches the peak of the mountain, the air descends along the slope and increases in speed, reaching up 100 km/h. but no longer carrying its original moisture.  The vineyards located on the eastern side, closer to the Apennines are greatly effected by the Foehn.

There is evidence that demonstrates that wine has been being produced in Abruzzo for centuries. Pliny the Elder and Polybius both had writings about the quality of the wine in the region. Today, Abruzzo has over 32,000 hectares under vine and produces almost 3.5 million hectoliters of wine each year. Of this production, the Controlled Designation of Origin is responsible for one million total hectoliters. Eighty percent of the plantings are Montepulciano d’Abruzzo followed by Trebbiano which has 12,000 hectares planted.

Today, the majority of the vineyards are located on the hillside within the province of Chieti. The other three zones, Pescara, Teramo and L’Aquilla, make up 25% of the total production. Although there are many small family run wineries, the preponderance of production is done by 40 cooperative wineries.

The Consorzio Vini’ D’Abruzzo was founded in 2003. It’s mission is to “protect, enhance and oversees the interests linked to the designations in its association. It ensures denomination rules and regulations are respected, oversees proposals to update these regulations and coordinates the work of the sector’s production categories in order to give value to the single designations.”

The Montepulciano d’Abruzzo DOC was founded in 1968. As mentioned, it is by far the major player in Abruzzo. In order to label a wine under the DOC, the wine must be composed of a minimum of 85% Montepulciano. Bottling requirements mandate a minimum of two years, with nine months in oak in order to be classified as a riserva.

The Abruzzo DOC was created in 2010 in order to focus on the importance of the native grapes in the region. Wines are bottled from the Passerina, Cococciola, Pecorino and Montonico varieties. Trebbiano d’Abruzzo, founded in 1972 is a bit of an conundrum as it allows for varietal wine Bombino Bianco to be used. It is thought that this is allowed because the two varieties have frequently been misidentified and in the past have been used interchangeably. The vineyards for the DOC are all located in hilly or plateau soils.

Cerasuolo d’Abruzzo was once considered a subsection of the Montepulciano d’Abruzzo DOC, but in 2010, it gained its own DOC status. The rosé wines must have a minimum of 85% Montepulciano and can only include other authorized grape varieties. The wine is made in a specific vinification technique. The regulations have limitations on the amount of time fermentation can be in contact with or completed through white vinification. It is the first Italian DOC specializing in rosé. to One year later, Villamagna gained it DOC status requiring a minimum 95% Montepulciano.

The strictest regulations fall under the DOCG category. Abruzzo has two regions that have acquired this status. Tollesi (Tullum) which is one of the smallest Italian DOCGs. It is located in Tollo municipality, in the province of Chieti and has strict regulations on production yields. They require the exclusive use of native vine varieties. The DOCG also is the first to introduce the concept of single vineyards cru that require planting density less than 1,600 plants per hectare for the pergola abruzzese system (tendone), and lower than 4,000 plants per hectare for vine rows. Authorized grape varieties include Montepulicano d’Abruzzo, Chardonnay, Passerina and Pecorino.

The first DOCG in Abruzzo, Colline Teramane Montepulciano d’Abruzzo, gained its status in 2003. As expected, the DOCG’s only authorized grape is Montepulciano d’Abruzzo. The territory is found in the province of Teramo. Finished wines must have a minimum of 90 percent Montepulciano and a maximum of 10 percent Sangiovese with two years minimum aging, of which at least one year must be in oak barrels. The wine must spend a minimum of six months in bottle prior to release. 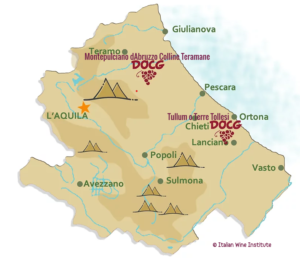 There is so much to explore within this region. Between the national parks, ancient aqueducts and amphitheaters, festivals honoring their history and even one to honor Saint Domenico protector of toothaches and snake bites. If snakes aren’t your thing, you can see the old fishing stations known as trabocci that date back to the 18th century. Not to mention that the food is incredible and of course the wine.

Mike and I just spent 10 spectacular days in Italy. We flew into Rome, then traveled to Florence by train and ultimately ended our trip in Venice. We were celebrating our 21st anniversary. I know… most people celebrate their 20th with a major trip, but we don’t like to be like most people. We figured…

The Day It was a beautiful day in New York City. The sun was shining, which was a rarity this Spring, as I listened to one of my favorite podcasts and walked down Grand Street on my way to Tomiño Taberna Gallega. The intimate restaurant is a little slice of Galicia in the heart of…

Well, our trip is coming to an end. This is our last day on the “Right Coast”. We will be heading back to the “Wrong Coast” tomorrow.  Today was all about pleasure. We are just going out and tasting some wine. Of course, we are always looking for some Cab Franc!   Rancho Sisquoc Tasting… 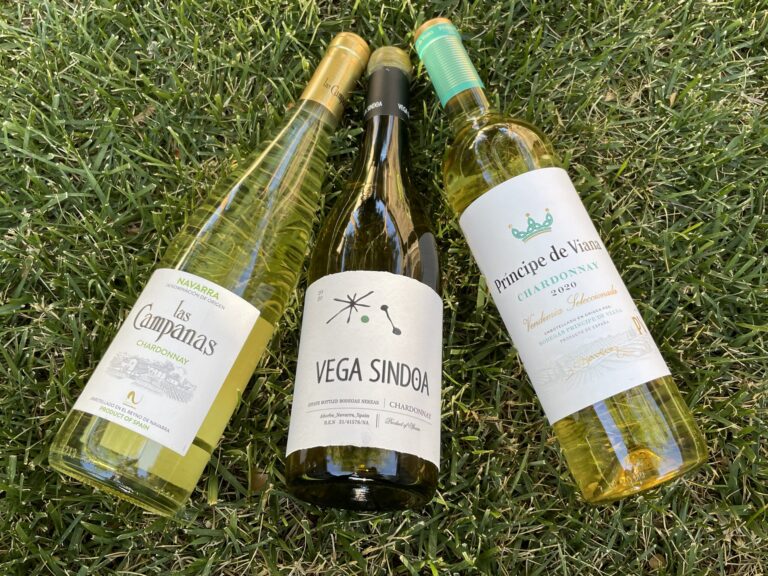 Located in the northern portion of Spain, situated just below France lies the autonomous wine region, Navarra. The region, home of a single DO with the same name, is divided into five sub-regions; Valdizarbe, Tierra Estella, Ribera Alta, Ribera Baja, and Baja Montaña. These regions are extremely diverse thanks to the proximity to the Atlantic…

It’s a Wednesday night. Some people call it “Hump Day”, in Finland and Sweden it is called “Little Saturday” [don’t ask me why] but for most people reading this post, it is better known as “WineWednesday!” And what do we do on “WineWednesday” other than drink wine? We sit down at our computers, or on…